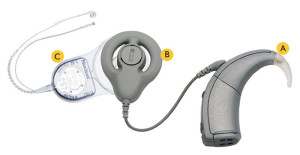 What is a cochlear implant?

A cochlear implant is a small, surgically implanted, complex electronic device that helps provide sound to a profoundly deaf or severely hard of hearing person. The implant is placed under the skin behind the ear and has four basic parts:

• A microphone, which picks up surrounding sound
• A speech processor, which selects and arranges sounds picked up by the microphone
• A transmitter and receiver/stimulator, which receives signals from the speech processor and converts them into electric impulses
• Electrodes, which collect the impulses from the stimulator and sends them to the brain

This implant doesn’t restore or create normal hearing, but instead with the proper conditions, gives a deaf person a useful auditory understanding of their surroundings to help them understand speech.

How does a cochlear implant work?

A cochlear implant is not the same as a hearing aid. Hearing aids amplify sound where as a Cochlear implant compensates for damaged or non-working parts of the inner ear. When hearing is functioning normally, complicated parts of the inner ear convert sound waves in the air into electrical impulses. These impulses are then sent to the brain, where a hearing person recognizes them as sound. A cochlear implant works in a similar manner. It electronically finds useful sounds and then sends them to the brain. Hearing through an implant may sound different from normal hearing, but it allows many people to communicate fully with oral communication in person and over the phone.

Who gets cochlear implants?

Different types of deaf and severely hard of hearing people choose cochlear implants. Both children and adults can be candidates for implants. According to the Food and Drug Administration 2005 data, nearly 100,000 people worldwide have received implants. In the United States, roughly 22,000 adults and nearly 15,000 children have received them.

Adults who have lost all or most of their hearing later in life can often benefit from cochlear implants. These older candidates can often associate the sounds made through an implant with sounds they remember. This may help them to understand speech without visual cues or systems such as lipreading or sign language. Normal ear anatomy.

Young children can also be candidates for implants. Cochlear implants, coupled with intensive post-implantation therapy, can help young children to acquire speech, language, developmental, and social skills. The best age for implantation is still being debated, but most children who receive implants are between 2 and 6 years old. Earlier implantation seems to perform better.

How does someone receive a cochlear implant?

A cochlear implant is a surgical procedure. The decision to receive an implant should involve discussions with many medical specialists and an experienced surgeon. The process is expensive. Some may choose not to have a cochlear implant for a variety of personal reasons. Also, though surgical implantation is almost always safe, complications are a risk factor, just as with any kind of surgery. An additional consideration is learning to interpret the sounds created by an implant. This process takes time and practice. Speech-language pathologists and audiologists are the professionals frequently involved in this learning process. Not everyone performs at the same level with a cochlear implant. Prior to implantation, all of these factors need to be discussed. Ear with cochlear implant.

What does the future hold for cochlear implants?

The technology behind cochlear implants is changing rapidly. With advancements in technology and continued follow-up research with people who have already received implants, researchers are evaluating new opportunities and additional possible candidates for cochlear implants.