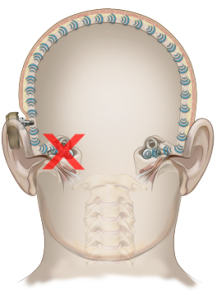 Single-sided deafness was a primary subject of interest at the recent American Association of Otolaryngology - Head and Neck Surgery Foundations's (AAO-HNSF) Annual Meeting held in Orlando, Florida from September 21-24, 2014. Dr. Jack Wazen served as the moderator and presenter of a mimi-seminar on the subject. National experts in the field discussed the various options that patients have to treat single-sided deafness. Non-surgical options, such as bi-cross hearing aids or the Soundbite System were presented. Surgical options were also discussed - including the osseointegrated bone conduction systems, which have been traditionally used since 2002, and cochlear implants which are being more widely applied, so are now being considered for this condition.

Dr. Wazen was also a panelist on single-sided deafness at the American Neurological Society (ANS) meeting which also took place in Orlando the day before the AAO-HNSF Annual Meeting began.

In addition, Dr. Wazen and Dr. Herbert Silvertein co-presented an instructional course on Meniere's Disease and Migraines. They presented the differences, similarities and treatment options of both conditions to a full room of medical attendees.

In its 118th year, the AAO-HNSF Annual Meeting & OTO EXPO℠ is the premiere education and networking event for the otolaryngology—head and neck surgery community. This September there were 8,200 attendees from 70 different countries at the meeting in Orlando. This is the largest meeting of Otolaryngologists in the world.